Forsaken World General Cheating Methods
As in most MMORPG games the most popular method of cheating is the one that skips the grind, the farming and the leveling process most effectively. It simply takes quite a long time to level up new characters when you need to get a healer or tank or DPS for you guild and let’s be honest; no one likes to have to grind another 100h just to get where they already are. Bots will take control of you account and automatically farm for you and they are currently the preferred method of cheating in FW, though if using them is really cheating can be disputed. Anyways, bots are a very convenient tool for this game, because they let you skip the tedious stuff and get to the fun. Aother way of cheaing would be to exploit bugs in the game to gain more XP, gold, items, Eyrda Leaves and other resources more quickly. Bugs can manifest themselves in flawed sales prices, exploits in the auction house, duplicated items and so on. While finding these exploits can be hard, since they are getting fixed on a regular basis, they are some of the most potent and powerful cheats in the game, IF you are lucky enough to find them and keep them a secret. However, using exploits that are already leaked to the public is a very, very bad idea, since the developers of the game are naturally going to be aware of those as well. Using exploits that are publicly available usually leads to a ban. The last and hardest to find kind of cheat for Forsaken World are hacks. Hacks are basically programs that mess with the game physics and can teleport you, make you run faster and alike. Hacks are hard to find, because they are not all that much help in farming and leveling up and are mostly used in PvP. 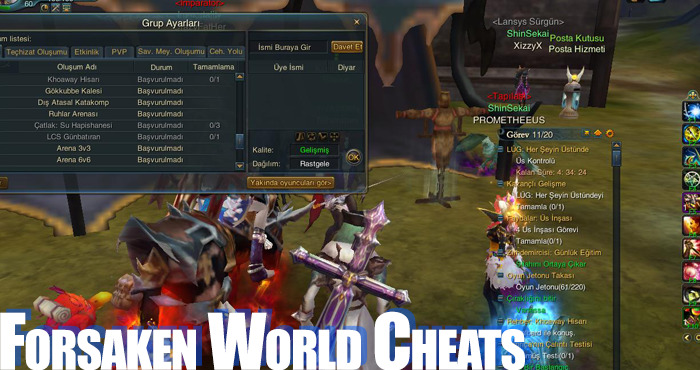 Forsaken World Bots and Farming Scripts
As mentioned before bots are essentially software programs that you run on your PC and play Forsaken World for you automatically. Now while this sounds very simple, some very complex software is required to make such automated tasks work. Bots cannot think like humans, they have no way of thinking creatively and coming up with their own solutions, every possibility has to be accounted for in the programming so that the bot does not get stuck. Bots usually are only able to complete very pecific tasks, such as running a specific route and farming all the mobs along it, looting them and maybe selling some of the items according to certain specifications. However, most bots cannot run dungeons, raids or level up skills automatically. While some bots can actually do quests, automatically maxing out a character by using bots alone is almost impossible. The bot has to be reset and reconfigured every few days in order for it not to get stuck. Using this kind of software you can expect to level up your characters and alts pretty quickly without having to actually put in the manual “labor” of farming. You can also use the scripts to simply farm gold coins, eyrda leaves and gold. The in-game auto-routing function makes botting this game a lot easier, but even that function can get stuck, leading to your bot being unable to complete quests and rotations. However, since the auto routing function is included in the game, your bot will seem a lot less suspicious if it should ever get stuck on terrain, since this happens to legit players as well. That is also why Forsaken world can be considered one of the games that is most safe for botting at this time. Another important thing to keep in mind is that tanky classes, such as Protector / Warrior will do a lot better job at farming than squishy classes like the Marksman. 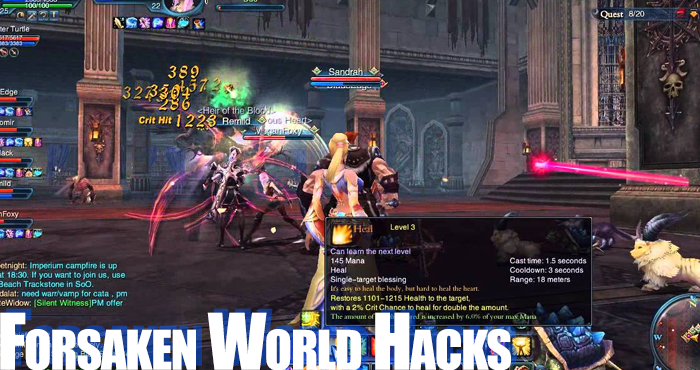 Forsaken World Hacks, Possibilities and Impossibilities
Many kinds of hacks are advertised out there. Hacks that give you unlimited health, unlimited money, leaves, unlimited experience and even allow you to get the best items in the game. However, the truth of what hacks can really do in online games, such as Forsaken World, is quite different. Since all the really important game stats, such as your health, stats, inventory, your Zen, your class and so on are stored on the Arc servers, there is simply no way to hack these. You would literally have to commit a crime and circumvent the server security to do that and that can get you to prison, make no mistake. Never the less, there are hacks for Forsaken World, but they are merely able to manipulate the game process on your PC and can allow you to teleport short distances, walk up walls, walk through walls, fly, jump incredibly high and similar things. Now while it is possible that in certain circumstances hiding in a wall may be similar to a god mode, the two are quite different. On top of that hacks are incredibly hard to come by, since they are predominately used in PvP and not that many people are interested in PvP

Smash Champs Hack. Smash Champs is an awesome game. It is possible to enjoy this enjoyable game on diverse devices like iOS/Android. This is actually the most intense game that will blow you away. Best strategies are required if you want to compete with the best in game. Considering that in game can be found…

After a lot of time of learning from mistakes and improvement, and lengthy study we’ve eventually were able to give a cheat for VainGlory Hack. Its primary purpose is incorporating Unlimited Gold, Glory and Unlock all Heroes! That you don’t have to supply any consideration information as our device has generated-in consideration and telephone discover…

Football manager handheld 2015 hack Football Manger Handheld 2015 is a video game revolving around football managing club where you make the main decisions about the transfers and tactics. It has been launched on the iOS and android platforms. It is one of the best selling and award winning series of video games that can…

Express Invoice Plus for Mac effortlessly oversees and tracks your charging. Express Invoice Plus for Mac gives you a chance to make receipts that you can print, email, or fax straightforwardly to the customer for quicker installment. Web console gives remote access for different clients to make receipts, oversee and create charging reports. What’s new…

Foursaken Media brings a very interesting game. Bug Heroes 2, an Action game , Adventure and RPG with beautiful graphics. IF gold, diamonds or stars is a problem for you we have a solution . Bug Heroes 2 Hack Cheats is the new hack created by our team morehacks.net.. It was tested on several devices…