Battlefield: Play4Free Cheats,
Cheating in Battlefield P4F is the use of any technique, method, software or strategy that is not part of the official games ruleset, toolkit or accepted playing style. – This includes a whole variety of cheats: There are software cheats called aimbots or hacks that allow you to see enemies through walls and also allow you to aim and shoot your opponents automatically. These hacks are detectable and using free ones can easily be answered with a ban on your account, since you are not the only one that has easy and free access to these cheats. It is advisable to use paid products here that are private and therefore almost undetectable. On the other hand we have the cooperation with other players that allows you to farm a whole lot of Experience and credits (Coins, Money) and therefore unlock more abilities and weapons faster. If you cooperate with other cheaters, it is possible to create whole farm servers in which one side just quickly amasses a lot of kills on the other side and after one round the roles change. – Obviously, this kind of cheating requires a lot of planning and coordination, but is one of the most effective ways of leveling and farming in Battlefield Play4Free. Cheating is also possible by exploiting bugs, such as glitches enemies. Explots or Bugs exploiting is the most effective and overpowered means of cheating, but at the same time the most unlikely and the hardest to achieve: The chances of finding a exploitable bug and it being exploitable for long is very, very low unless you know how to find them and reproduce them: But when it happens, the potential for farming kills is nearly limitless. Overall be careful when cheating in BF:P4F, since other players will report you if you are being obvious even if the software you are using is private and you do not want to lose an account you invested lots of time and money into. 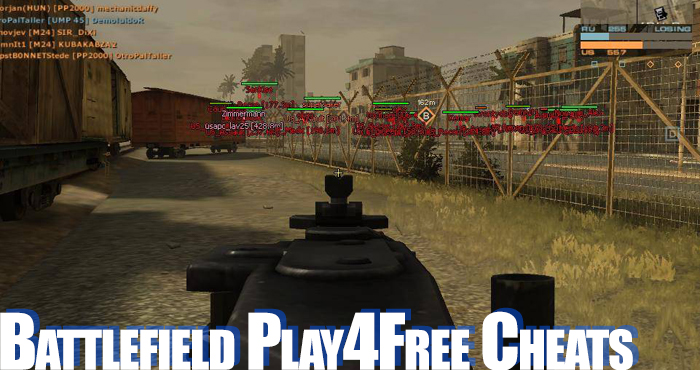 Battlefield P4F Aimbots
An aimbot is a script or hack that is injected into the game process of BFP4F on your PC in order to add an auto aiming functionality to the game. Usually an aimbot will be able to aim for you automatically at the press of a button and high-quality products will even include what is called a “triggerbot” to automatically shoot (trigger) your gun after the aiming. Aimbots can be very easily detected by other players wathing you, since especially the cheap aimbots will aim instantly, resulting in very jerky movement and easy detection by your allies and opponents. More high-quality auto aiming software however will include function to slow down your aiming, limit the angle in which you aim, delay the trigger and disable headshot. Only headshot kills are a dead giveaway, but that should be obvious to anyone. Aimbots generally allow you to bind the auto aiming script to a key on your keyboard or a mouse button and as you hold down the key, the auto aim will do its job and aim at the enemy that is closest to you and that you have line of sight on. Only very few aimbots are programmed to shoot through walls, since again that is a dead giveaway that you are a cheater and does not help anyone. Generally aimbots can be used with any class, but are by default most effective on Recon. If you are playing recon, most players do expect you to be quite accurate and since you are often alone, it is easy to cover up your cheating activity. Aimbots work similarly well on Assault and Engineer. If you want to use a Medic LMG along with an aimbot however, you are going to need some kind of noRecoil and noSpread hack in order to compensate for the awful accuracy of your gun. Generally don’t use free aimbots, since they literally get detected within a week and with BF Play4Free obviously being a free to play game, the devs won’t hesitate a second to ban you. 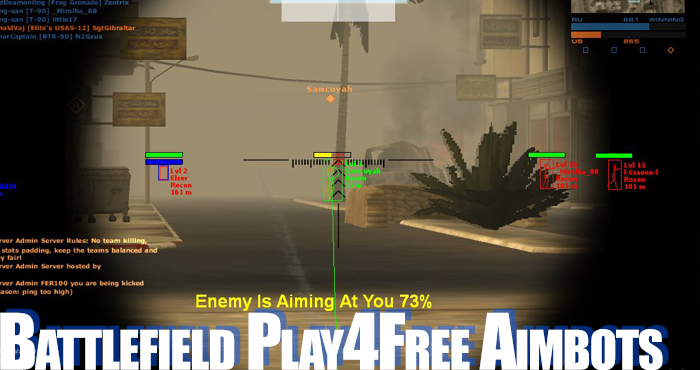 BF Play4Free ESP Wallhacks
Extrasensory Perception Hacks allow you to see things that you would not be able to see in the default version of the game (things that are outside of your … perception). ESP hacks are also know by their more popular name the “Wallhack” or “Wall Hack” because some of the irresponsible hack users use them to shoot people through walls. – Don’t do it kids, people will know you are a cheater and they will report you ASAP. ESP hacks can basically display anything to you: Enemy position, distance, their health, their class and weapons, ammo, their rank, if people are seeing you, if people are aiming at you, positions of claymores and other explosives and a lot more. Battlefield is in its nature a tactical game and knowing the enemy positions is a huge advantage. Generally, ESP hacks are a more fun and generally cheaper version of the aimbot. While auto aiming takes a lot of the fun and sense of achievement out of the game, Wallhacks retain the need to display skill to do well in BFP4F and will therefore be more fun to use. Detecting wall hacks is also nearly impossible by watching other players, unless you are committing the cardinal sin or shooting enemies through walls. – Resist the urge! If you want to save some money and still have a huge advantage and fun in the game, then this is the kind of cheat you are going to want to get. Again: cheap software or free software will be detected easily, please stick with high-quality software to protect your account.