Skyforge General Cheating Methods
Since there is a cap on farming of almost all kinds of resources and currencies (sparks, calss sparks, credits, faith, particles and so on), the use of farming bots cannot allow you to progress at the same rate it can in other similar MMOs. However, farming bots are still quite effective in running solo levels on low difficulty or farming open areas for quest rewards to save you time reaching the caps. Skyforge bots can also automatically send out your adepts on missions and collect rewards. Tho farming bots are not quite as insanely effective as in other games, they are still the most popular way of cheating in SF. Another way of cheating is the use of exploits: Exploits are small or significant bugs in the game that may allow you to get greater rewards, sell items at higher prices, duplicate items, kill mobs easily and so on. A very common bug in the beta was that some boss mobs could get stuck and then easily killed without unleashing any AoEs or attacking at all. – These kinds of bugs are being found all the time and can be used until they get patched. A third way of cheating in Skyforge would be the use of hacks that inject code into the game on your PC to get some special “features”. Now let it be said that there are no God Modes (unlimited health), infinite money or sparks hacks for Skyforge, since this in an online game and these values are stored on the server and therefore unhackable. However, stuff like speedhacks, noclip (walking through walls), flying and so on can be used in PvP to great effect, until you get reported. So it’s quite risky to use hacks. Power leveling isn’t really a thing either, since there are caps and carties are limited by their prestige. 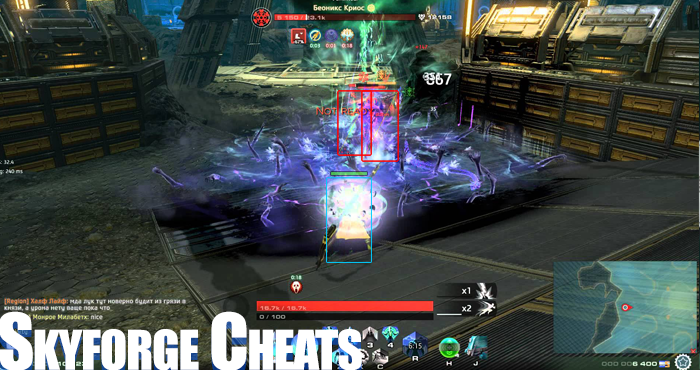 A bot is a program running on your computer that is able to read the game memory of Skyforge, locate your character and control it to interact with the environment, follow paths and attack enemies. Some bots may even be able to sell items, change classes, complete quests, send out adepts and so on. However, Skyforge does have a lot of action game elements that make it pretty hard to bot the game effectively in addition to the caps on farming resources and money. A lot of enemies require you to dodge AoEs or skillshots, which bots are unable to do. However, they are able to pick up health orbs to heal up. Another issue is that dungeons / event scale up to the prestige you are at and that means face rolling is not that much of an option either and every dungeon you enter, can potentially kill you. That means that bots have to use tank classes (Paladin or Berserker work bot well) with AoE in order to function effectively. It is not recommended to use pots to farm with a group, since they will notice that your account is being botted and might report you. At the moment, farming areas using bots is both the best way and the riskiest way of doing things, since mobs there do not really scale to your prestige level. – This is a pretty easy way of reaching your credit cap in about a day. However, there are other players in those open areas, son you might want to make sure your software does not get stuck on terrain. Farming solo dungeons is a lot less risky, since no one sees you, but it should be limited to about 12h per day. 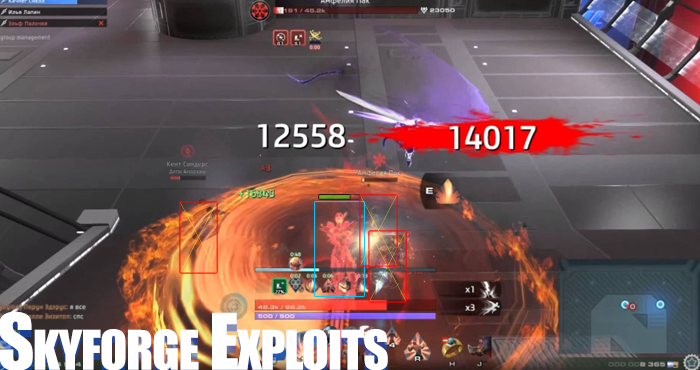 Skyforge hacks and what is actually possible

Again, this an online multiplayer game, so there are no unlimited credits, sparks or health hacks of any kind. It is also impossible to hack your Skyforge stats, ascension atlas, gear (items), cooldowns or limits. However, hacks can change the physics of the game: Speedhacks can make you run faster, teleport hacks can instantly change your position, jump hacks can make you jum really high or even fly, auto loot hacks can automatically loot everything for you and noclip/climb hacks can make you walk up or through walls. Now while these kinds of hacks can be useful in sol dungeons to get to the final boss fast, they may also make the game bug out. Though in PvP the use of client sided hacks is insanely powerful in dodging attacks and killing enemies. It is recommended that you only use hacksin 10v10 or larger battles, since else you might get detected by attentive people. The larger the group around you, the less attention will be focused on you and the chance for you to get reported is much smaller. We do not recommend that you use hacks, since they can be unfair toward other players and might annoy them.

HOW TO DOWNLOAD ❓ Any antivirus software and Chrome Browser may interrupt your download. We recommend to pause your antivirus and use Mozilla Firefox Browser to start safely download of Skyforge hacks, Skyforge Bots explained Updated