Vindictus Cheats – Vindictus Hacks.
Cheats in Vindictus are predominantly methods that allow you to either farm money, experience, items and ap a lot faster or increase effectiveness in PvP. This can either be done using cheating software, such as bots, hacks or clickbots, or some cheats can be done manually, such as merchant techniques and other exploits. Most people that are really serious about playing Vindictus are using one kind of cheat or another in order to not only save time, but also gain an advantage over other players. Most cheating methods are undetected, but you will still get banned if you are obvious about cheating and get reported by other players. So you should only use cheats if you are not in a party with other players, unless you know them and can be sure that they won’t tell on you. Also there are no cheat codes in this game, since cheating is not an intended part if the game experience in this MMO. 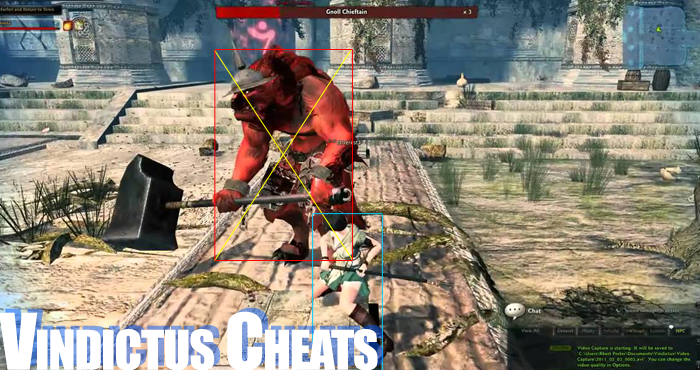 Vindictus Bots
Bots for Vindictus are in essence programs that are able to automatically log into your Nexon account ant take control of your Vindictus character in order to perform certain automated actions. Bots excel in farming Gold, Experience, Items and AP. However, bots can also be used to craft, sell items at vendors or the auction house. What a farming bot will usually do is: It will create private dungeon instance, kill all the enemies while following a set path, collect all the loot along the way and then teleport out back onto the city. The bot will then repeat this process for as long as it is running, resulting in it gathering insane amounts of XP, AP and gold (money). Obviously bots are unable to dodge incoming attacks, since a human mind is required to do that, so they will have to farm lower level dungeons in order to be able to tank the boss there. Tank characters like Lann, Fiona or Karok are the most effective characters for using farming bots, since they are fairly proficient at taking hits to the face and surviving it, allowing you to farm higher level dungeons. How efficient a bot is at farming depends not only on its programming, but also on your gear, level, abilities and other variables. Generally however, bots will farm very efficiently in Vindictus.

Mostly you will not be able to use your computer if the bot is running. So you might want to consider having a dedicated botting PC, if you are really serious about using bots in Vindictus. Bots are usually undetectable, since they do not change any code in the game client. Never the less, you should turn off your bot at least 4h a day in order to protect your account. An account farming one single instance for 24h a day can raise some red flags and may automatically get your account submitted for review by a game moderator and you do not want that. So make sure to vary your bot paths up every day and give the bot some downtime too in order to protect all the work you put into your account. 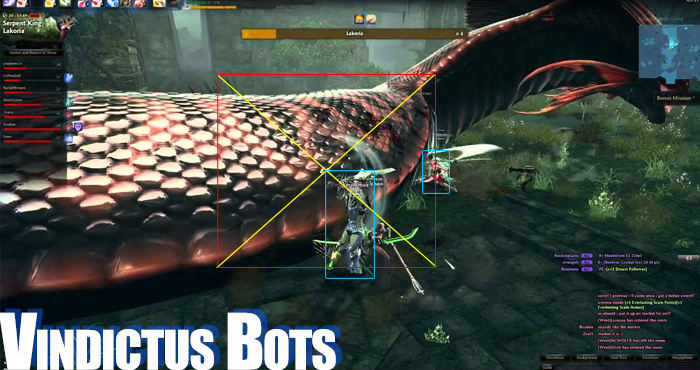 Vindictus Hacks
Hacks are essentially programs that inject code into your game client in order to add cheating functions to the game and give you an advantage over other players. Hacks can do a whole bunch of things: They can make you run faster, jump higher, fly around, walk through walls, teleport, show you a map of a dungeon and show you items and enemies through walls. Hacks are most effectively used in the PvP of Vindictus and are pretty much useless in the PvE. In PvE hacks will result in you getting stuck and disconnected from the game more often than not. However, using hacks in PvP has its dangers as well: If other players notice that you are hacking, you might get reported and your account might get banned. A way to get around this is to choose a really, really complicated name that is just too complicated for anyone to read and memorize. – This is astonishingly effective, since humans are generally lazy. Also make sure that the hacking software you are using is up to date, else the hack might get detected and put your account in danger. 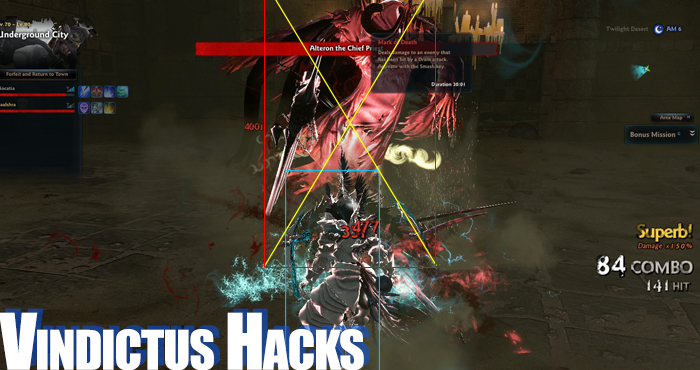