Is it possible to cheat in Echo of Soul?
Yes it is indeed possible to cheat in EoS as it is in most other tab-targeting MMORPGs. Bots that automatically farm gold, XP, level up your character are probably the most popular way of cheating here. Alongside that, there are hacks that are mostly used in PvP and infinite dungeons that allow you to activate some simple client-sided functions and there are exploits, such as dupes as well. However, there are NO god modes, infinite gold hacks or anything like that.

Is it legal to cheat and will I get banned for doing it?
Cheating in games, while it is frowned upon, is totally legal and will not get you punished in any way. However, the game provider, in this case Aeria Games / Changyou, are allowed to ban anyone from their service for any reason. So it is recommended that you use quality software, try to keep a low profile and do not annoy other players to make sure you are fine.

How much do EoS Bots / Hacks cost?
Your average Online Game bot or hacking software will cost you around 10 to 20$ per month, since skilled programmers (scripters) are required in order to keep the software updated and undetected. 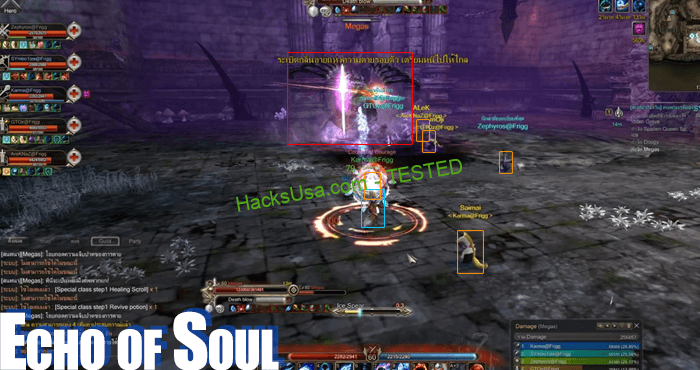 As already mentioned, bots are without question the most effective way of cheating in EoS, since they allow you to automatically level up your characters to 60, farm gold and items get orbs and so on. Most bots will simply roam the map and kill mobs, autoloot them and rarer ones will even be able to complete quests for even faster leveling. Another way of cheating would be to use scripts to automatically use consumables, skills and abilities in certain situations or even to dodge attacks. – Scripts are more useful in PvP tho, since they are not really required in PvE, unless you are trying to complete endgame content on an under leveled character. There are also some less significant client-side hacks that can be gotten to work in Echo: Noclip hacks for walking through walls, flying or gravity hacks for flying or jumping really high, auto looting, loot magnets, teleporting hacks for faster farming and gathering ( as a Resource Collector) and so on. However, there are no hacks for things like unlimited health, money, levels, infinite aeria points and so on as that is sadly impossible in multiplayer games. Then there are ways of power leveling that will obviously change as the game gets updated and expanded on and may allow you to work together with your friends to level up to 60 in under 6h. Last, but certainly not least are exploits. Exploiting is essentially the use of bugs in the game coding in order to gain an advantage. Duplicating items can generate a lot of money, bugged merchants may allow you to get almost unlimited gold, bugged spawns or mobs may allow you to get legendary drops in loads and so on. However, exploits are never around for long, since they will get patched as soon as they are made public. – Therefore it is recommended that you use private exploits to be safe. 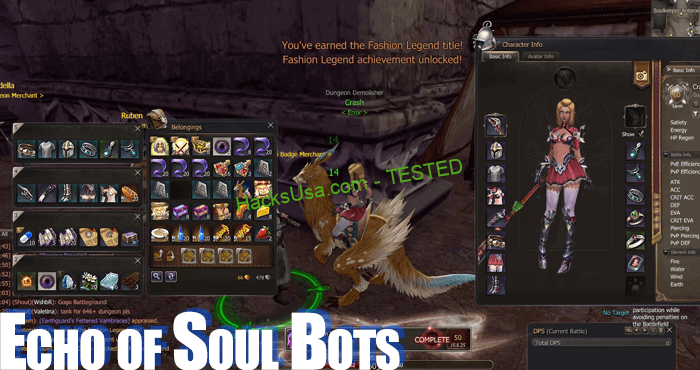 Echo of Soul Bots and how they work

A bot is fundamentally just a piece of software that is able to read the game memory of Echo of Soul and determine your position on a map. The program will then scan the map around you for objects and automatically interact with those in the manner specified by the underlying script. – In other words: A bot will automatically play the game for you and is most essential respects undetectable. Compared to a hack, a farming script does not inject code into the game, making it invisible to any anti-cheat. Aside from gathering resources, farming mobs, looting and completing quests, some bots may even be able to sell items, change equipment and even do PvP. However, using bots in PvP is not recommended, since they usually do not act humanlike enough not be found out by other players. Bots are usually most effectively used in area for which a character is overleveled, as to avoid deaths. Tanky classes will also perform better when leveling with scripts, so Guardians or Warriors are probably the way to go if you are doing it for the first time. Bots should never be run 24/7, since most games do monitor the uptime of accounts and flag ones that are unnaturally active for closer examination. 12h should be within the acceptable uptime per day however. 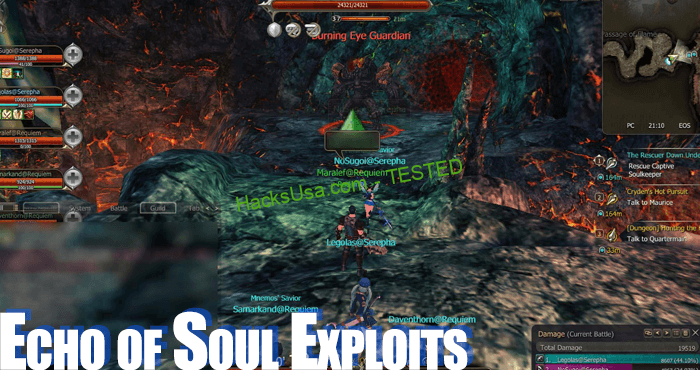 Echo of Soul Hack and what is actually possible

First, let it be said that there are no gold modes, item adders, Areia point generators or anything of the sort, because those values are not stored on your PC, but on the Aeria servers which you cannot access using any means. The only things that are hackable in Echo of Soul are the function of the game that are actually processed on your PC: speedhacks, gravity, climbing, noclip, zoom, teleporting and so on are possible. However, even these hacks are quite risky to use, since they are easily identified by attentive players that are then able to take some video and report you for using such cheats. Overall, using hacks in EoS is usually more risk than they are wort, unless you know exactly what you are doing or are in a private instance, such as a solo dungeon.