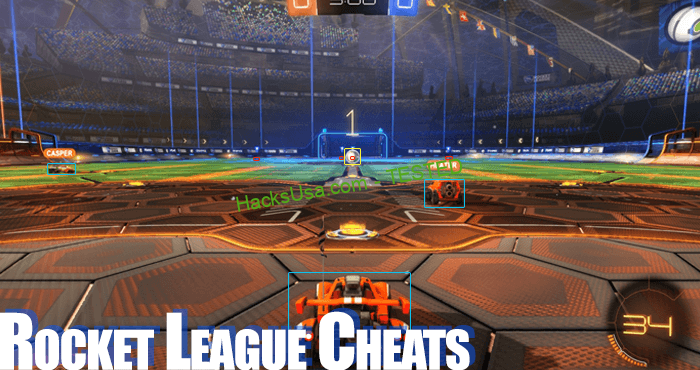 Is it possible to cheat in Rocket League?
While it is impossible to create a bot that would be able to perfectly set up shots for you teammates, it is possible to create a bot that is able to calculate the position of the ball and then automatically aim to shoot it in the enemy goals direction. These kinds of “aimbots” are the most popular way of cheating in the game. There are also some minor speed hacks and other client sided exploits, but those will get patched soon.

Cheating methods for Rocket League are sadly limited to very few approaches, since the game is a pretty simple one: There are players, 1 Ball and 2 Goals to score in. So essentially the only ways to cheat are either in movement enhancement or movement aim. Now automatically aiming and hitting the ball is possible if the aimbot is able to predict the likely trajectory of the ball and control your movement speed. While this kind of aimbot is pretty complex, it is certainly achievable: Through such physics prediction and aim / speed control the aimbot would pretty much be able to score a goal from any distance. The only game mechanic in the way of that are the walls, which make controlling your cars trajectory harder and same goes for the speed. Yet still aimbots will certainly be used in this game, since it is getting quite competitive in ranked games and many are looking to rank up and increase their skill level. Though at higher skill levels most people will be very experienced, able to do jump shots and use boost to its full potential, an aimbot can still make up for a lot of lack in skill. – However, do not expect cheating software to propel you to the top of the leaderboards on its own. Unless the cheating programs are getting to be as OP as the ingame AI was at release, humans will simply play better their skill increases. I you are already a skilled player on the other hand, this kind of tool will only make you more OP.

This particular game was made to be competitive: It is very simple and therefore the few parameters like boost, ball position, player position ect are easily controlled by the server and therefore unhackable. In other words: There is no god mode, no significant teleporting hacks, no infinite boost, no unlimited XP, no unlock hacks and so on. The best you can really hope for is that you are able to slightly increase your speed through client-side hacking. Granted, at the start of the game it was possible to make ones car invisible through the use of exploits, to teleport and even get unlimited boost. But those days are long gone and the game has been polished a lot since then and made almost impossible to hack through any conventional means. The reason for this is that most of the important values, such as positions, speed, boost, XP and so on are stored and processed on the game server and that one cannot be accessed by any means to change those values. So unless you know a game admin or moderator, you are sadly out of luck. However, it is possible for the one or the other exploit to pop up every once in a while, but those too will get patched soon after they are found.

Any bots or hacks for Rocket League will be used on Windows PCs. The only other console on which the game was released in the Playstation 4 and as we all know this particular platform has not yet been rooted or hacked so far. I generally takes a few years for consoles to become hackable and even if they do, it is not something that a simple person without in-depth understanding and advanced hardware can do. Sadly there is no “hack USB stick” for consoled, though that would be a fun thing to have indeed. The only imaginable way to cheat in RL on console would be to use a proxy to edit packets, but such software is extremely complex and unlikely to get developed.

How much do Rocket League hacks, bots and exploits cost?
Usually, these kinds of cheats for Online Games are bought in a subscription format, since software requires skilled programmers and developers to be kept up to date and undetected with every patch of a game. There may also be free hacks, but they are very risky to use and should not be used on one’s main account.

Features:
Format : .rar or exe, no password  Filesize : found in download links bellow
Tips on how to set up Rocket League Cheats, Hacks, Aimbots and Exploits for PC, PS4, Xbox One and Switch FREE :