Are there any cheats for World of Warships (WoWs) out there?
Yes, there are, most that are publicly available come in the form of aim-bots, lead markers, auto cruise extensions and cam modifications to name a few, client side mods. There are some full-fledged bots out there which automatically play the entire game for you, entering your login information and a click of a button, it will slog away at the controls. These bots are hard to come by though, quite private and hard to find as there are many, many fake results leading you to malware and survey offers.Note, there are NO credit, experience or piaster “hacks” short of you purchasing credits and piasters from Wargaming’s store.

Cheats in World of Warships are mostly mods that are applied to the game client, thus they are mostly hard to detect, unless you blatantly are seen following certain patterns or doing things out of the norm, e.g. clipping through land (sorry no no-clip hacks have been made yet) in that case, other players will report you to Wargaming and they might ban you on account for suspicious behaviour.

Most of these mods are there just to give you that edge, and to ease gameplay for you by giving you information that the typical user does not. More info about such mods will follow below.

Hacks for credits, piasters, experience, auto unlock of ships, rapid training of captains etc. are not available as all the data is stored server side, modifying anything on their servers with hacks, are considered illegal in many countries and states and can get you fined and imprisoned. 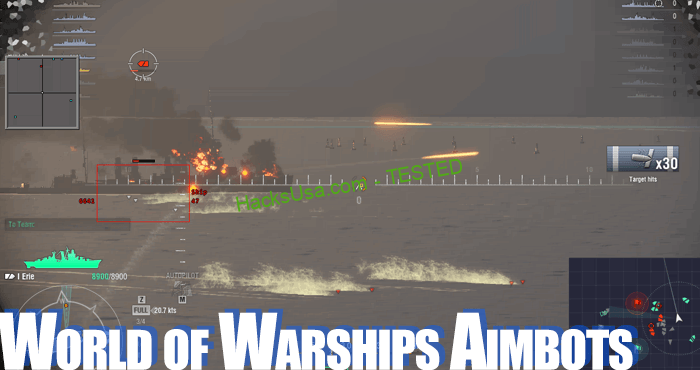 Not much is known of these kind of mods as the game itself is still in development, and creating a bot would be hard as it would need to be constantly updated with each new update, expect to see more of these kind of cheats pop up when WoWs comes into open beta, or open release.

Currently there are bots that automatically select a ship and join a battle, making ships sit afk to grind credits and exp. They are terribly inefficient as Wargaming has made afk countermeasures netting you very little exp and credits per game sat afk-ed which would last 15-20 minutes per game, unless you are willing to have an extremely low stats, and the high risk of being banned for afk-ing too much, and a lot of time to spare, this is not for you.

There is a slightly improved version which makes the ship drive directly forward, kamikaze-ing into the enemy, which is much better than the afk bot, and will net you considerably more credits and experience. It is harder to detect as well. As the behaviour cannot be differentiated from a noob/newb or extremely inexperienced player.

There is one version which has the aimbot integrated into the programming, allowing the bot to shoot back, this also includes recorded pathing for the ship to travel for each map and position, using the auto-cruise function. This bot is the hardest to detect so far, and there have been no detections yet. It also nets you the most credits and experience per game, essentially it is as good as an average player in the game, perhaps slightly better, but currently it is priced at a 80USD per month.

Lead marker/Aimbot
This mod was developed from a line of code that the developers mistakenly left during alpha testing, and the cheating community took a hold of it and saved a copy of it. This cheatmod displays x’es in front of targeted ships, reducing the need for you to guess the lead of your shots, and to put fire in more effectively. The aimbot works on a similar method, it uses that same data and locks your cursor onto the leading marker, allowing you to focus on other things while you just have to click the fire button when you’re reloaded. The X estimates the location of the citadel, and thus also allows you to have a higher frequency of citadel penetrations, or basically critical damaging hits.

World of Warships Exploits:
Generally, at the launch of most MMO’s a wave of exploits and game bugs are found and the games forums are a raging fire of players complaining that a certain exploit needs to be patched. Although no public exploits have been mentioned on any WOWS forums they are still there to be found. For example, someone could possibly find a way to glitch themselves in an island allowing them to shoot other boats, while not being able to receive returning fire.

Credit, Gold, and Experience Generators:
As sad as the truth is, there are NO credit, gold, or experience generators available in World of Warships. The technical reason why there aren’t these generators is because these values are processed on the server-side of the game unlike wall hacks which are processed on the client side. The realistic reason is: why would there be these magical generators when undetectable bots are still being developed? Even then, when World of Warship bots become fully operational, credit, gold, or experience generators will never be developed. 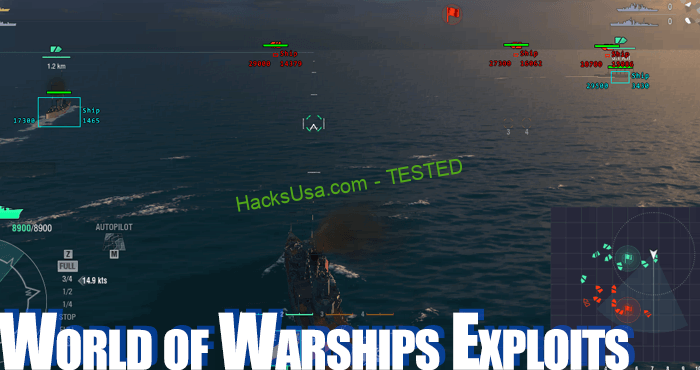 Client-side Hacks Such as Wall Hacks and Damage Hacks:
Client-side hacks such as wall hacks and damage hacks are very much possible. These values can be accessed through your client. These hacks hacks can and will be game-changing because the foundation of World of Warships is aiming and firing your weapons at other ships. Wall hacks make all enemy ships visible even with smoke and islands scattered across the map. Damage hacks could make a cruisers main caliber guns do a lot more damage meaning you could kill enemies with a lot less shots. Combining wall hacks and damage hacks with an aimbot and you have a deadly combo that probably keeps the developers up all night. Aimbots essentially auto track the enemies within the map and take control of your mouse. They are a computer so there accuracy rate when firing is around 99%. With all these client-side hacks mentioned, it’s astounding to announce that WOWS has NO in-game reporting system! The only way to catch and report a possible cheater is to record your game and message a GM (game moderator).

World of Warships Power-leveling Services:
With the lack of fully functional bots in World of Warships, cheap human labor is seen as the next best thing. Many players will look down the skill tree of their nation (Current nations include United States and Japan) and see some amazing perks that they really want. This is where power-leveling services come into play. Basically, you will give a company your username and password and they will play, farm, and power-level on your account till the desired experience, credits, or gold is accumulated for you. 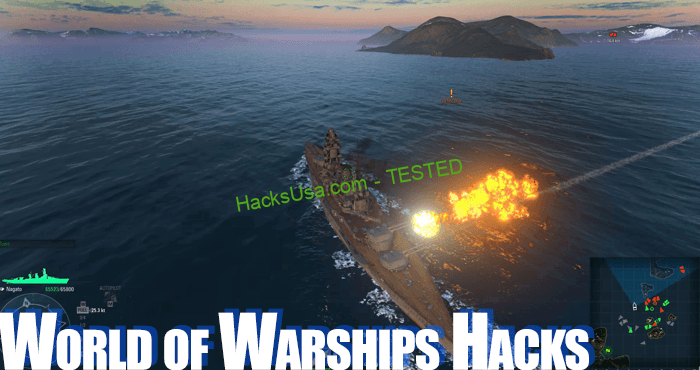 Autopilot restriction remover
This cheatmod removes the 5 waypoint upper limit for autopilot mode for cruising. This allows you to set more waypoints for the ship to travel, so you can focus on aiming your guns and shooting the enemy. Having more waypoints allows you to better define your route, and plan ahead with greater efficiency.

Camera view cheatmod
These type of cheatmods basically modify camera views allowing you to have viewing angles that can be helpful, but are not available in the original client.  Notable ones are top down satellite view, extra far zoom out mod and freecam.

Mod Packs
Already people have compiled the available mods together, and removed any clashes with files and redundant features, streamlining it into a nice installer or a “one file drag-drop” ease installation. Reputable mudpack creators update their packs quite frequently and they are quite reliable.

Reminder again, these hacks do not exist or are highly illegal as they must hack into the servers to work. Most of the hacks claiming to be able to do this are scam sites that will lead you to surveys, make you download viruses or malware or try to steal your credit or account information. I recommend staying away from these sort of hacks altogether, as even there is one in the cluster of fakes that might work, it carries a possibility of legal prosecution.