Spellsworn is an Online Player vs. Player Arena Game. It is a place where wizards and magical creatures use their wits and spells to wage war in an everchanging arena. Prove yourself in the arena and battle with all who dare call themselves your peers. Victory and pride outweighs reason and diplomacy, thus any debate between wizards is indistinguishable from outright warfare. Alliances will be broken, lives will be lost and the world will crumble. Will you remain, towering over the ashes?
Spellsworn is heavily inspired by classic arena games such as DotA, League of Legends, Super Smash Bros. and traditional sumo-wrestling. Most of all however; Spellsworn is inspired by the user-created mod Warlock, made in Warcraft III.

Each round you, the spellsworn, will recieve some coins to fund your battle. A shop stocked full of spells will serve as your arsenal as you prepare for the next battle round. It’s imperative that you choose your spells carefully, as they may be completely countered by your enemy if you’re not careful. There’s very little grace to be had when standing with your pants down and no way of counterattacking your enemy’s barrage of destruction

There’s plenty of ways to play Spellsworn. If you enjoy playing in teams and making up sick combos and rediculous plays with friends then maybe 2v2, 3v3 or 2v2v2 is for you. If you’re more of a strong independent lonewolf then 1v1 is also fully supported (including all of the FFA variations, i.e 1v1v1v1 and so on). In the future we’re hoping to include workshop support for your own scripted gamemodes and playstyles. 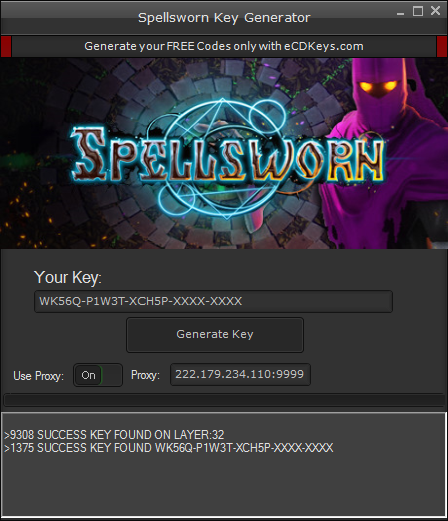 How to use the Spellsworn CD-Key Generator: